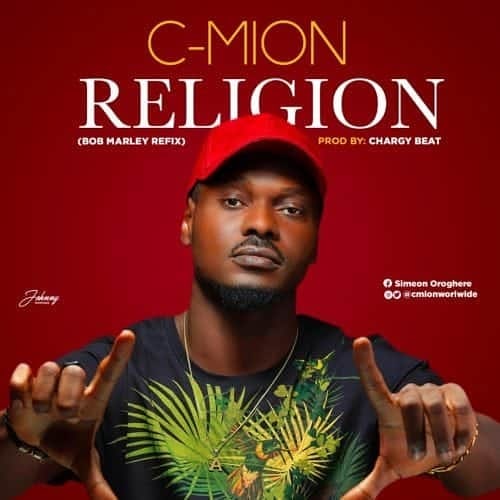 Legendary reggae musician, late Bob Marley is sure happy in his tomb right now as his legacy is being kept alive. One of his disciples and incontrovertible sing-alike, C-mion has just relived his memory with the release of yet another enchanting cover of one of Bob Marley’s hits, Religion. C-mion, real names Simeon Oroghere, spent his formative years in the cosmopolitan principal city of Warri Delta state where he started his musical career.

In the last few years, while making Lagos his home he has grown to become a part of the contemporary Nigerian music industry. C-Mion came out with this smash hit, which is a Bob Marley refix, produced by Chargy Beat a.k.a Sandaz Black, and is already guaranteed to be a playlist favorite.

The outstanding artiste, whose effort has been recognized severally, as he was nominated for the Next Rated category at the Headies Awards in 2006 and 2007. He had his voice behind the smash hits BARAJE by Ruggedman, NO BE GOD by Gino, DANCEHALL by Spydaman, NANANA by Bb and a host of many others. After his long break from the music scene, he returned with a classic piece TOMORROW (A tribute to late OJB Jezreel) in 2016.

He has worked and collaborated with the likes of top-rated artistes such as DJ Jimmy Jatt, Illbliss, Dr Sid, Jaywon, Waje, Sossick, N6, Blaq Jerzee, Sean Tizzle, Abounce, K show, Six O, Ruggedman, and many others.

Video for Religion was premiered in January 2019, and has been enjoying airplay on top cable and local tv.